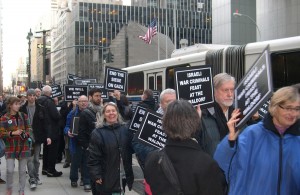 My office is located unfortunately close to the Waldorf Astoria Hotel. On Tuesday evening when I left my office there was a diverse group of individuals protesting a fundraiser for the Friends of the Israeli Defense Force (FIDF).

The FIDF’s Mission Statement is this:

The FIDF initiates and helps support social, educational, cultural and recreational programs and facilities for the young men and women soldiers of Israel who defend the Jewish homeland. The FIDF also provides support for the families of fallen soldiers.

Although I understand the intention of the protest I took offense to a lot of what I saw. The protesters held signs advertising the number of Palestinians killed by IDF soldiers during various unspecified instances. The protesters themselves were too culturally diverse and not culturally diverse enough. They were all holding pre-printed, uniform signs. (what could be less genuine than pre-printed signs? I saw three variations… why distribute signs at all?).

The FIDF as an organization does not advocate increased military action. It does not advocate killing Palestinian children. It simply supports soldiers and their families who have suffered while fulfilling their legal obligations as citizens of a state. I cannot imagine an anti-Iraq war protest being held at a dinner to benefit veterans of the war.

I have to wonder if the organizations protesting the event knew anything about the FIDF. And if the organizers printed and distributed signs based on an inaccurate perception of what they were protesting- it is just as disturbing as if they willfully protested a benefit for veterans and their families.

Need help with the Commons? Visit our
help page Send us a message
Skip to toolbar

Built with WordPress Protected by Akismet Powered by CUNY