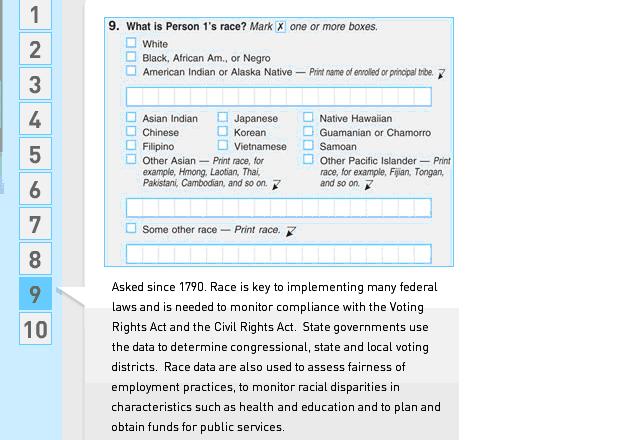 Twice in one day I was asked to provide someone with my “race”. Dictionary.com defines race as:
1.
a group of persons related by common descent or heredity.
2.
a population so related.
3.
Anthropology.

Without going into further detail (the list goes down to #10, and #3, Anthropology has 3 subcategories) race is what it is. It is ethnicity, I guess. But if it really is a group of persons related somehow to one another, why does the census choose to list out some countries and territories and leave out other regional or ethnic groups on its checklist?

At the risk of sounding redundant like the census, why is question #8 specific to Hispanic people? “Is Person 1 of Hispanic, Latino, or Spanish Origin?”
From there it gives you the options: Mexican, Mexican American, Chicano, Puerto Rican, Cuban or other Hispanic, Latino or Spanish origin.

And then why are hispanic people not given a box to check under race? Is hispanic not a race? And lastly, why is there no check box for Middle Eastern? Now, in all honesty, this should not apply to someone like me who has really never been accurately profiled… but what about those individuals of Middle Eastern descent that have been? The same rules should apply… if they are to apply at all.

This exhibits a fundamental misunderstanding of Middle Eastern culture that I think explains very well why the US and other Western European countries have no business in the Middle East. It’s like they acknowledge everyone’s differences but those of Middle Easterners who are a very distinct group of people united by very distinct characteristics and attitudes towards themselves and others. There is a specific middle eastern culture that I may not be a part of but I have witnessed enough to identify and understand. The absence of a check-box for this group on the census form is an aberration; a society so culturally diverse as to have separate questions for those of Hispanic origin should certainly not exclude a group that is distinct in any way.

I live in an apartment with three other people. One other of my roommates and I opted for “other” and filled in the boxes with “other”. He is half Moroccan and half Italian.

Need help with the Commons? Visit our
help page Send us a message
Skip to toolbar

Built with WordPress Protected by Akismet Powered by CUNY